By definition a barn find is a classic car that has been rediscovered after being stored, often in derelict condition. Although the owner knew of this cars whereabouts we still love the history behind this vehicle and it certainly felt like a Barn Find to us. Enjoy!

You are on a rural property where you discover an old farm shed or machinery shed, you open the door to find it loaded with rusty farm equipment, timber and roof guttering. However, to your surprise sitting in the corner under sheets and covered in bird s#*t is an Australian muscle car that hasn’t cranked over in decades. This is the exact thing we experienced in country NSW.

While at a BBQ in May of 2018 visiting a mate Terry, we got onto to the topic of Australian muscle cars. In our day these V8s were just TUFF cars to us. We had no idea that that these muscle cars were going to become highly sought after collector items. During our conversation Terry says “I still have one in the shed, do you want to come and check it out?

Walking over to his shed, I had no idea what to expect. As he opened the door sitting in the corner of the shed was a car that has spent the last 20 years of its life sitting in the one spot under garden equipment and sheets covered with plenty of bird s#*t. It was Terry’s very first car, a 1976 XC Ford Fairmont Hardtop.

When it comes to Australian muscle cars the XC is very popular. It was introduced in July 1976 with production continuing through March 1979. 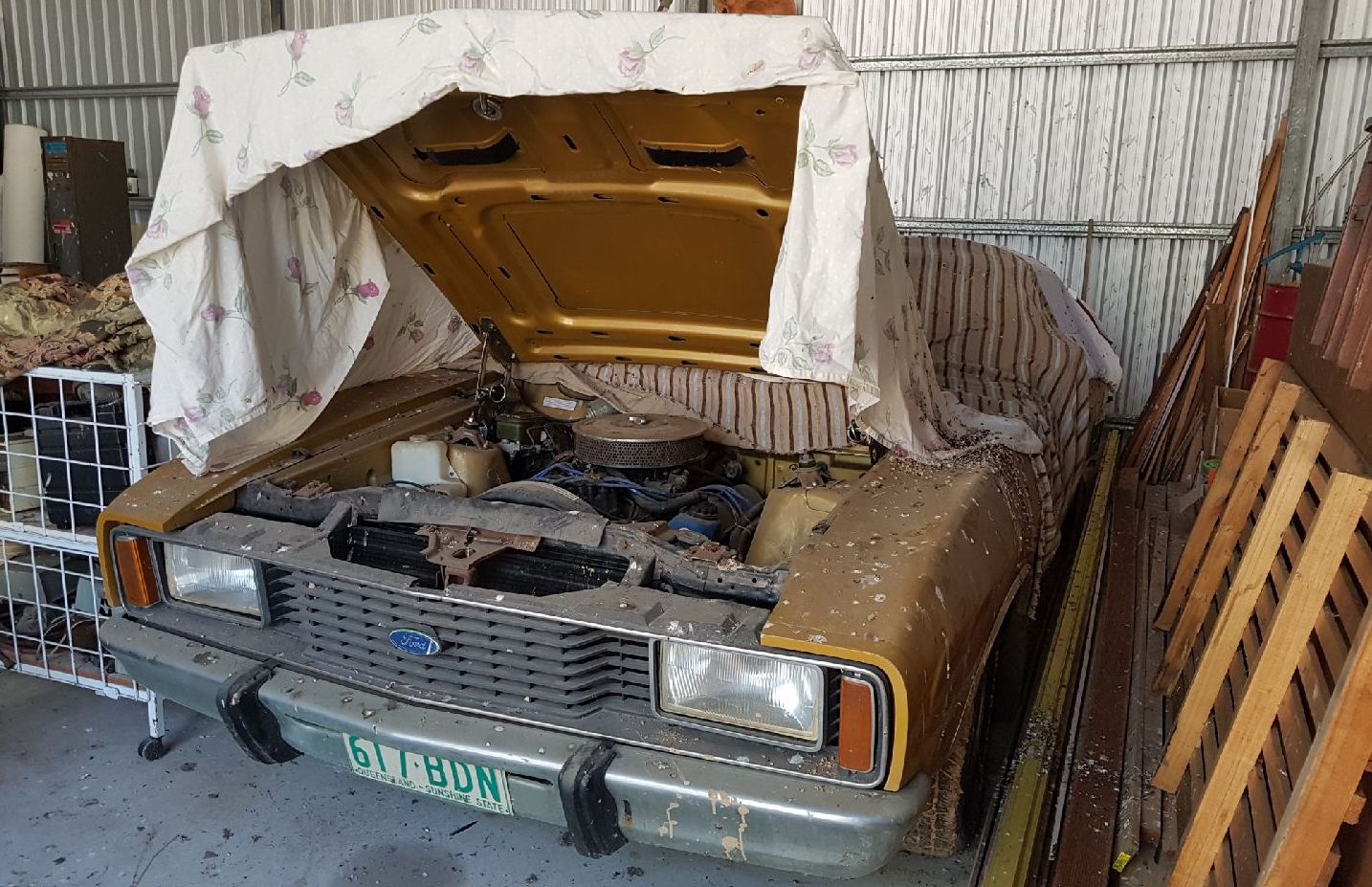 The history behind this 1976 XC Ford Fairmont Hardtop

When did you purchase the car?
Terry: I bought it 2nd hand from a Car Dealership on Brisbane’s Northside in 1983. At the time I was a 19 year old apprentice carpenter and spotted it on the way to work one day. I would drive past the car yard everyday day and look at the car. Even when I was young I loved the Ford muscle cars. Eventually I got a loan through the ANZ Bank and purchased it for $5,799.00. I still have the original purchase receipt.

Can you tell us more about the car?
Terry: This particular car was built 10/1976 and was one of the earlier model XC’s. It is also a Farimont noticeable by the 2 rectangular headlights at the front. Under the bonnet is a 351 V8 3-Speed Automatic and the XC is Goldrush in colour which is not often seen in the Ford Coupe’s.

Did you do any work to the car over the years?
Terry: In 1988 we stripped it all down and rebuilt the car from ground up. This included cutting a bit of rust out, did some repairs and a full re-spray. This was when the car was in it’s best condition.

The decision to keep the XC Fairmont in storage

Why did you decide to store it in the shed rather than just sell the car?
Terry: I bought a property in country NSW about 20 years ago. All my spare time went into building the house where I am and setting that up.  I always had the intention and wish to pull it all apart again, even just talking about it now I would love to take it back to its former glory. There are some photo’s back from 1988 when it was in pristine condition after a re-build. I have always wanted to do it back up but other priorities come about. 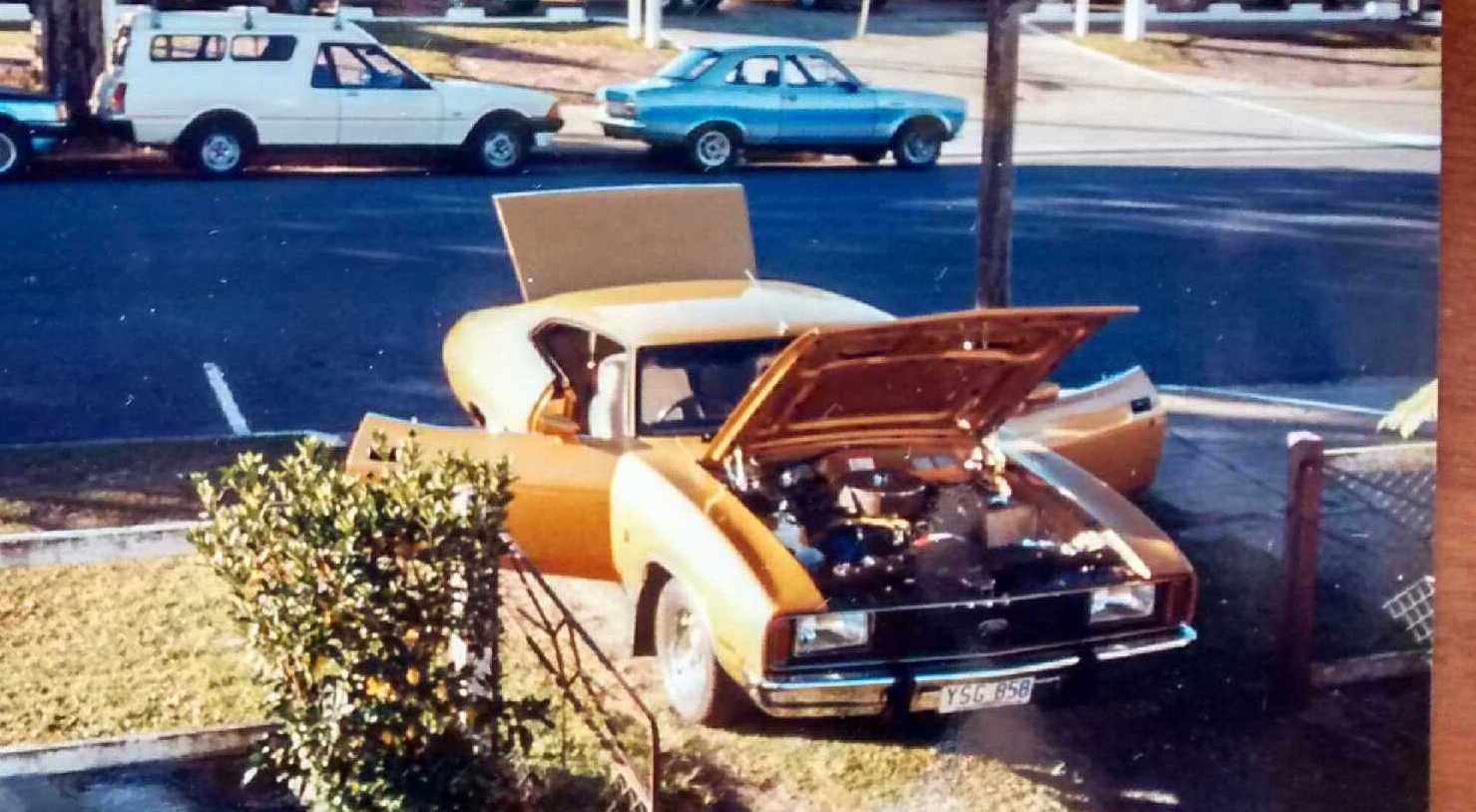 What are your intentions with the car now?
Terry: I have been thinking about selling it for a couple of years now. I have a couple of really good mates I have spoken to about it, one says sell it and the other says keep it. I would love to do it up, keep it and drive it a few times over a year or so just to re-live the feel of it because it was a beautiful car to drive especially on a highway. After 12 months I would probably then sell it in Mickey Mouse condition. It just whether it is realistic or not, have I got time to do that?

A couple of weeks later I returned to Terry’s to see the car fire up for the first time since it was placed into storage.

“Cleaning the car ready for sale was quiet easy, all I did was give the body and the engine bay a good Gerni.  The engine required a bit more attention before the start-up. I dropped the oil, lubed up all the cylinders and turned the engine over by hand. After some time I then put in new oil and spark plugs, dropped a bit of fuel down the carby and turned the key. The engine then started for the first time since I parked it in the shed almost 20 years ago.” Tells Terry.

Below is a quick video of one of the early start-ups that we captured.