After a long summer break round 1 of the NSW State Championship finally arrived at sunny Wakefield Park and part of the programme was the first round of the NSW HQ championship. The schedule saw one practice session followed by qualifying and subsequently three sprint races. 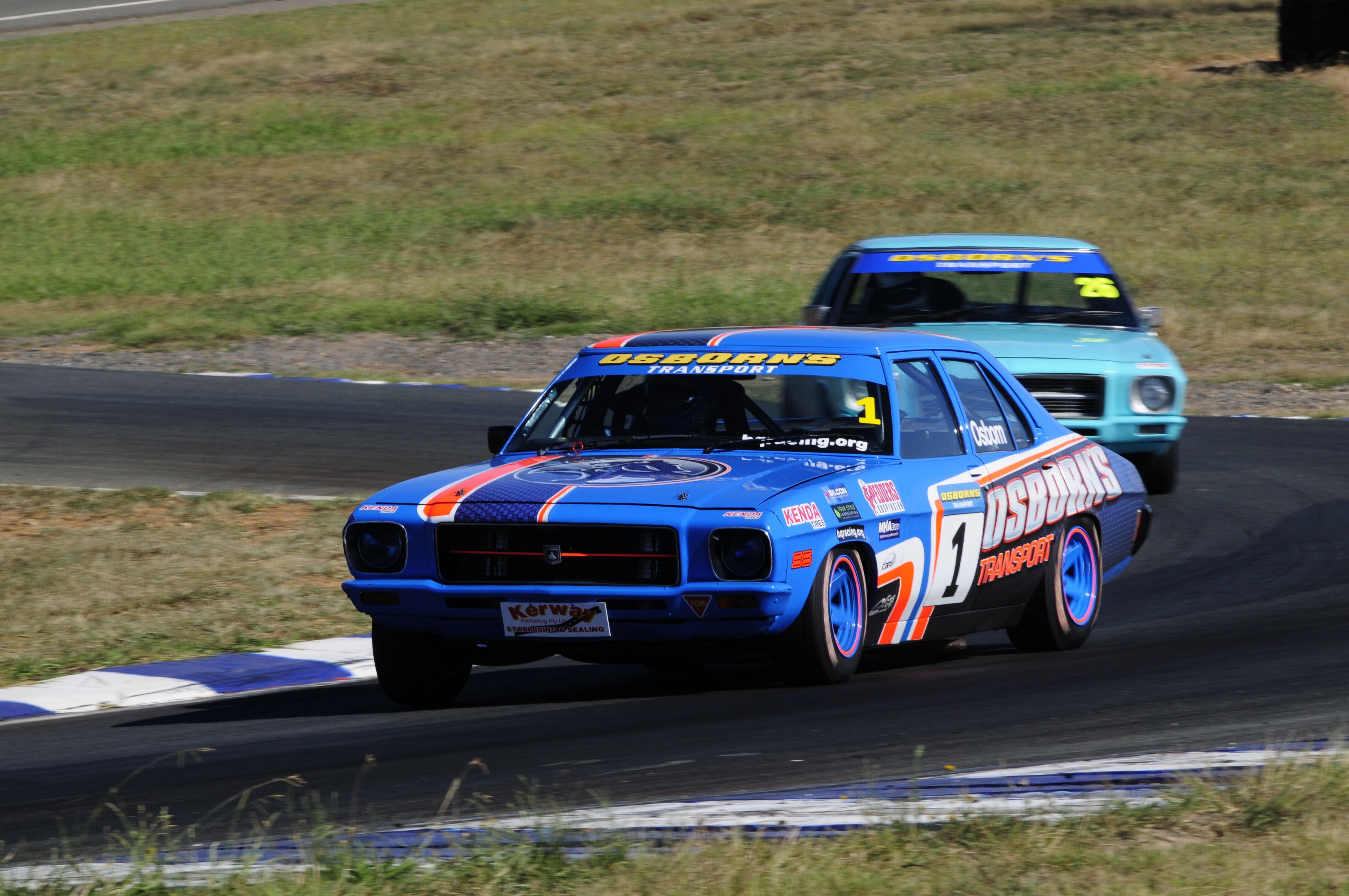 Glenn Deering came out in early morning practice and set a benchmark time to be fastest in the session, however in qualifying Brett Osborn showed his true colours and claimed pole from Duane Cambridge. The second row consisted of Jason Molle and Chris Molle, while row three saw a returning Scott Walker line up beside David Proglio.

The warm up lap for the start of the first race was very slow and took a while for the cars to grid up. Once the light went out Osborn made a brilliant start and was closely followed by Cambridge and the two Molle boys. This group of four formed a lead pack as the rest of the field squabbled for positions. David Allan went wide at the fish- hook and toured the dusty and dry outfield, he rejoined the rest after losing many positions. Jason and Chris Molle both went past Cambridge and started chasing Osborn down, and at the same time Walker was struggling with pace and was losing positions. 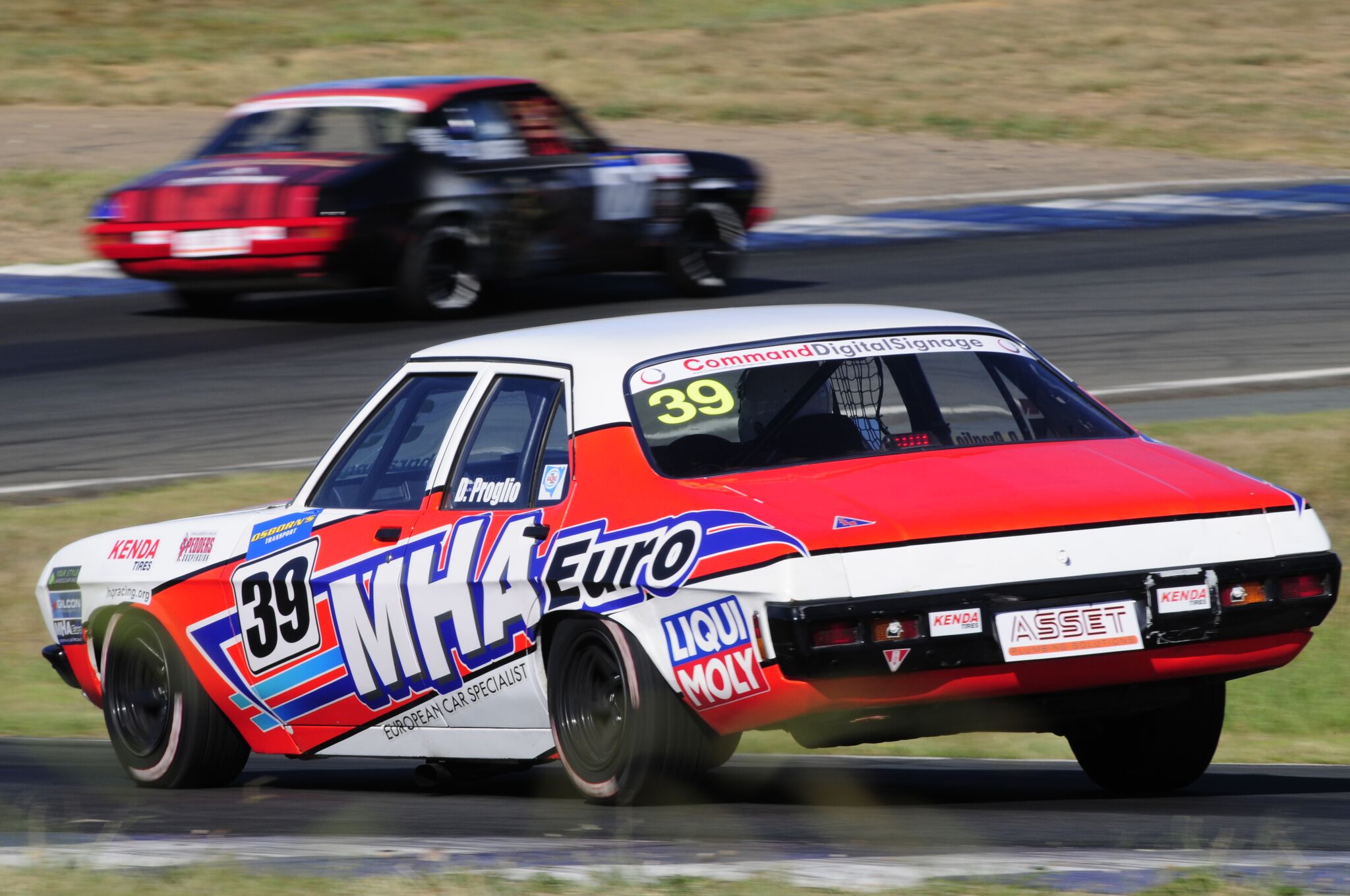 Shane Cox came past turn 2 with his car misfiring, and not long after that he pulled over to be the first DNF. Luke Harrison and Glenn Deering drove from turn 1 to turn 6 side by side, and in the following lap they attempted to do the same thing but unfortunately  they came unstuck and toured the grass on top of the hill. For Harrison it would not end there as he and Ian McLean drove door handle to door handle down the main straight until a slight touch sent Harrison into the gravel trap and that is where he finished. McLean was given a 30 second penalty post race. In the end Osborn continued his championship winning form from last year to take another race win from Jason Molle and the recovering Duane Cambridge. Full Race 1 footage by BLEND LINE TV below.

Race 2 saw Jason Molle make a great start to edge out Osborn into turn 2. After the initial scrambling of positions a six car battle formed at the front; Jason Molle, Osborn, Cambridge, Proglio, Chris Molle and Deering. The unfortunate Matthew Barker toured slowly with an ill sounding car and eventually retired. Mark Baxter and Ian Mclean clashed at the fish-hook and the end result; was McLean’s car sustaining heavy damage at the front, while Baxter’s car looked like a shark bit a rear quarter panel off. Safety car was initiated and the field was bunched up.

At the restart Osborn wasted no time in putting pressure on Jason Molle with the two making the run up the hill side by side, this is when all hell broke loose. Jason Molle had a slight lose while dicing with Osborn and his car went wide taking Cambridge with him. Both drivers could not make the corner and continued on the grass, rounding the poor camera man that was behind the tyre wall and proceeded to drive on top of the go kart track. Both drivers rejoined the race, however the positions in the field became shuffled.

The new order was Osborn from Proglio and Chris Molle, and this is when the latter made his move. Within 3 laps Chris Molle overtook Proglio and Osborn to gain the lead and eventually win. Osborn came home second while Deering edged out Proglio to finish 3rd.

A clean start by all in the final race with Chris Molle making a brilliant start and taking the lead, the rest of the drivers diced for second position allowing Chris Molle to pull away. As the cars came across the control line for the first time the leader already had a five car length gap to second placed Osborn. As the race settled a four car battle formed for second position that included; Osborne, Deering, Proglio and Jason Molle. Attrition rate was high in this race with Cambridge, Harrison and Cox all retiring in the early stages.

Pedro Marusic’s Orange HQ started sounding sick at the back of the field becoming another DNF statistic.  Osborn was eventually able to clear Deering and started chasing down the leader but ran out of laps. At the end Chris Molle won comfortably from Osborn 2nd and Deering 3rd. Great racing by all, a special mention to Chris Buckley notching his 150th race start in the NSW State Championship.