Unstoppable Scott McLaughlin escaped a near catastrophe to claim his ninth win of the year, after a lap one tangle with team-mate Fabian Coulthard in the Truck Assist Winton SuperSprint.

Shell V-Power’s McLaughlin overcame the odds of leaving the track on the first lap to claim his ninth win in 13 starts, equalling the number of wins he took in the course of an entire season last year.

During a first lap melee between Chaz Mostert and Coulthard at the front, McLaughlin squeezed past his team-mate on the fourth corner, but they bumped, putting them both off the road.

Coulthard returned to the track in last place, from a front row start, while McLaughlin short-cut the infield to rejoin in the one position behind where he left, in third. Coulthard subsequently received a 15 second penalty which he served at his pit stop.

Officials ruled that McLaughlin had re-joined correctly, despite his short cut. 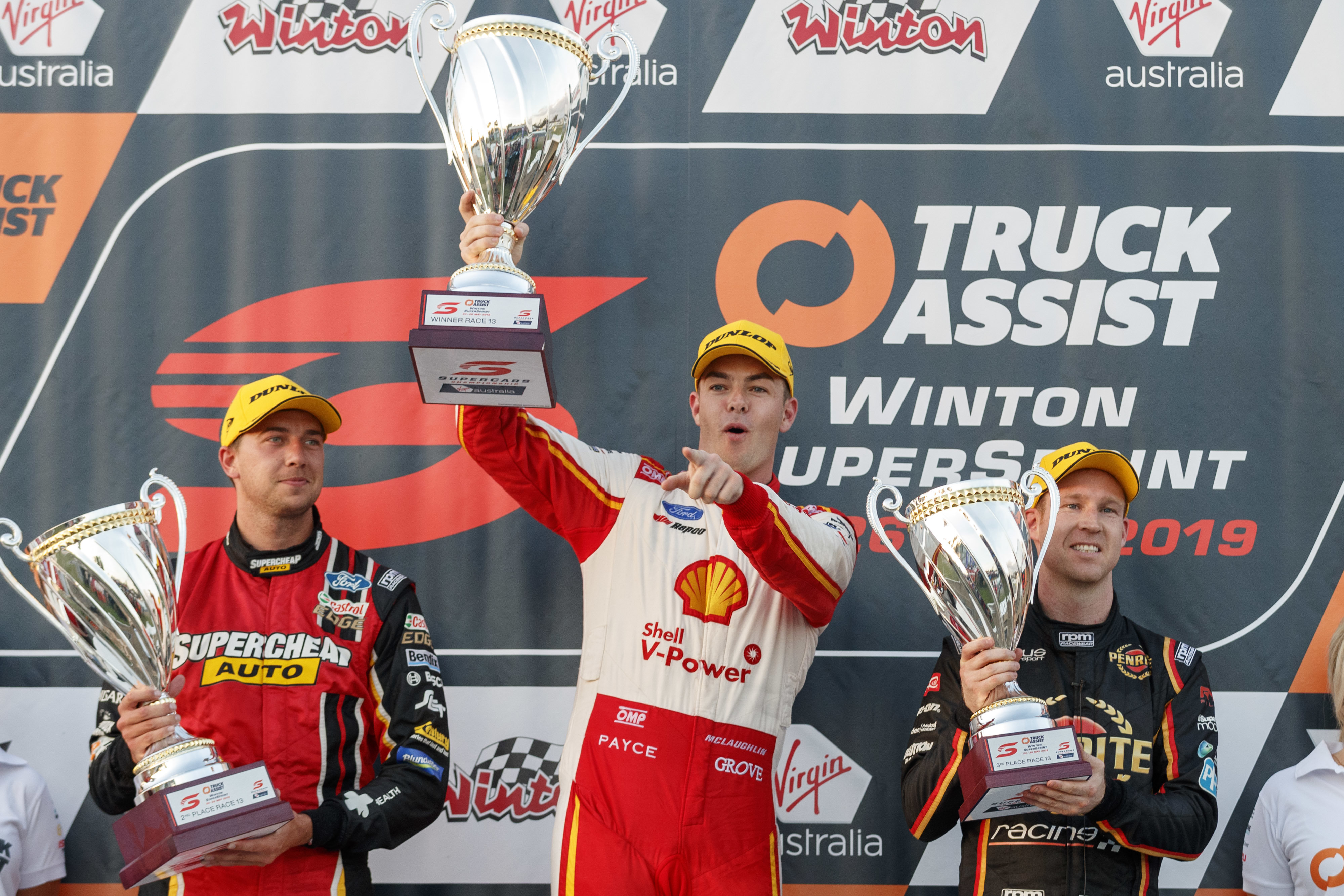 “It’s an awkward one,” McLaughlin explained.

“I thought that was my corner, I thought I was in front far enough. I tried to get back and rejoin in the right position, but I was going to go the wrong way. I was damned if I did and damned if I didn’t so I just pushed on. Thankfully it was okay.”

Coulthard put his hand up: “When you can replay moments over and over again you can get a better analysis of what is going on. We operate in tenths of seconds. You make a decision at that particular time and it is what it is. If you could hit rewind you would.

“You never want to hit your team-mate, so I put my hand up. Our policy is to not hit each other and unfortunately today I broke the policy.”

An unlucky Mostert, who surrendered the lead after a sluggish pit stop, came home second in his Supercheap Auto Mustang with Penrite Racing Commodore’s David Reynolds, who led a portion of the race until a five-second penalty, was third.

Mostert was reserved about McLaughlin’s rejoin despite his second.

“I will cry about it to try and get first (place) but it is what it is. He was hit off, it wasn’t his fault,” Mostert said. “It’s the toughest thing with the rain and the fact it’s very slippery here. In the end he was the fastest guy.

“It just shows you how quick these guys are, and we have to keep moving forward.”

Mobile 1 MEGA Racing’s James Courtney might also consider himself unlucky to not have scored his first podium of the year, having been bumped aside by Reynolds, which lead to the penalty, when in the early lead, which he claimed when Mostert and Coulthard clashed.

“I didn’t think there was much in that, I didn’t think it was five seconds,” Reynolds said. “We still ended up third, I don’t think we could have caught those blokes anyway.” 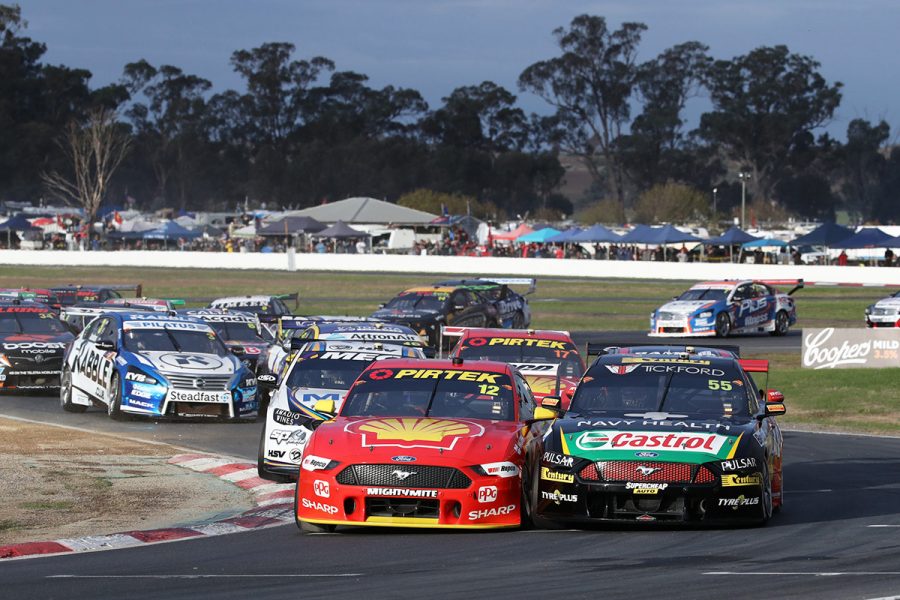 Mobile 1 MEGA Racing’s James Courtney might also consider himself unlucky to not have scored his first podium of the year, having been pushed aside by Reynolds, which lead to the penalty, when in the early lead, which he claimed when Mostert and Coulthard clashed.

During the melee Reynolds snuck by both Shell V-Power racers for second behind Courtney. He bumped by Courtney for the lead soon after while McLaughlin passed Mostert for second.

But the bump cost Reynolds a five second penalty to put him back behind Courtney. The penalty helped Whincup pass him having pitted early, giving him less tyre life than his opponents.

Courtney faded out of the top three while a slow pit stop for Mostert gave McLaughlin the lead following Reynolds’ five second punishment.

Andrew Heimgartner was the best of the Nissan driver’s in eigthth ahead of the Commodore’s of Mark Winterbottom and Scott Pye, who rounded out the top ten.

McLaughlin has extended his championship lead over Coulthard to 232 points after 13 races. Second for Mostert was the Tickford Racing driver’s fifth podium of the campaign.

Drivers have practice, qualifying and the final race of the weekend, a 200km SuperSprint tomorrow afternoon, which begins at 1:45pm.

SUPERCARS ON TRACK TIMES THIS WEEKEND (ALL LOCAL TIME):

Every practice, qualifying and race session of the Virgin Australia Supercars Championship is broadcast live in high definition on Fox Sports within Australia.

Supercars Trackside featuring all the latest news and views from the Supercars Paddock will air Sunday from 3:35pm – 4:35pm on Fox Sports 506 HD.