IN A FAIRYTALE result, Cameron Mason led from lights to flag to not only record his first Paynter Dixon Touring Car Masters victory – but deliver his stunning new Ford Mustang a first-start win as well.

The Newcastle-based driver led every lap of today’s 9-lap Dometic Trophy Race after being elevated to the front row in the grid inversion and then leading the field cleanly into the first corner.

While there was plenty of drama behind, Mason’s race was clean, controlled and untroubled as he powered to a five-second win at Queensland Raceway.

The son of 2007 TCM Champion Steve, Cameron Mason has contested at least one race during every TCM season bar one. His debut victory comes following several near-misses during his 44-round and now-127 race career that, until today, had a sole second-placed finish recorded as a personal best.

The stunning Russell Hancock-owned Mustang, resplendent in its Allan Moffat ‘Brut’ livery and an instant crowd favourite, becomes the first car to win on debut since John Bowe’s Torana triumphed for the first time at Winton in 2015.

“We had a game plan, which was one of two things; Let everyone past, or get in front and keep it there so fortunately ‘Plan B’ worked and we got the win,” Mason said.

“The balance of the car out of the box has been excellent. We’ll keep tweaking it. Straight away, it’s a great car.

“We’re getting a better handle on the car after a couple of clean laps out there and tomorrow we’ll do what we do and go racing and keep moving forward.”

Tilley started on the outside of the front-row but was beaten to second spot by Ben Dunn’s Chevrolet Monza on the opening lap, losing valuable ground to Mason as the pair battled.

Once he was clear of Dunn, he the steadfastly withheld a six-car battle for second position that waged until the line: edging out Ryan Hansford to secure second position by a scant 0.08 seconds.

“I really enjoyed that race,” Tilley said. “Sometimes you go into a battle like that expecting the ‘whack’, but it was really clean racing with great guys. I really enjoyed it.”

Hansford was the biggest mover, charging from 18th to third having earlier in the day passed his own fitness test following recent surgery to tackle a diagnosis of testicular cancer.

John Bowe made up even more ground, storming from 22nd to fourth in another typically stout performance.

Marcus Zukanovic was a solid sixth in the XD Falcon as the team continues to develop the still-new racer; running as high as third before the hectic six-car battle for second saw him shuffled back on the final lap.

Five drivers failed to finish; the most notable a wild moment at the start that saw Allen Boughen fired across the road and into the infield tyre bundles prior to reaching turn one.

The hefty contact with the barriers saw the iconic Mercury Comet suffer significant front-end damage, the team working hard to assess and hopefully repair the damage ahead of tomorrow’s pair of championship points paying races. 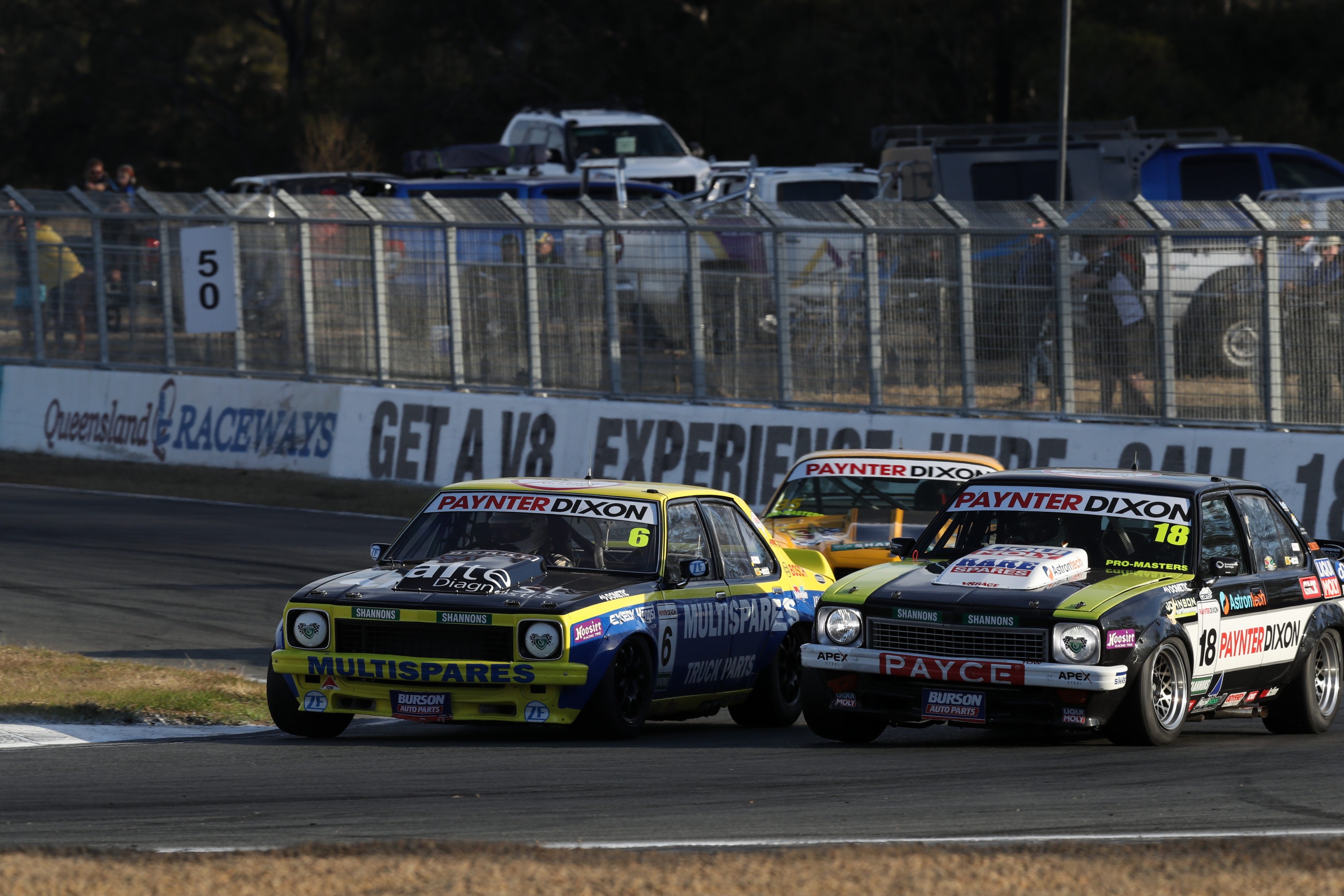 Earlier, Aaron Seton, the son of former TCM winner Glenn, charged to his maiden TCM pole position – smashing the existing record by nearly a second to break Steven Johnson’s stranglehold on the top spot this season.

It means the bright Orange Ford Mustang will start on pole position for Race 10 of the championship on Saturday morning.

Seton’s stunning 1m15.0214s flyer was 0.3s quicker than Johnson, who will start the 10th championship race of the season from the outside of the front row on Saturday morning.

There were more surprises behind the pair of Mustangs, too, with Rob Hackwood posting a stunning performance to place the Wellpro Racing Pontiac Firebird third – another career-best performance on his home circuit.

Hackwood was just 0.2 seconds behind Johnson, and in-turn was 0.1s quicker than John Bowe’s Holden Torana.

Ryal Harris made it four Queenslanders – Bowe the only interloper – in the top five while Adam Garwood continued his strong run with Whiteline Racing to qualify sixth.

The remainder of the top-10 was completed by Ryan Hansford, Jason Gomersall, Jim Pollicina and Adam Bressington.

Both races will be shown live on FOX Sports 506 and Kayo Sports streaming.