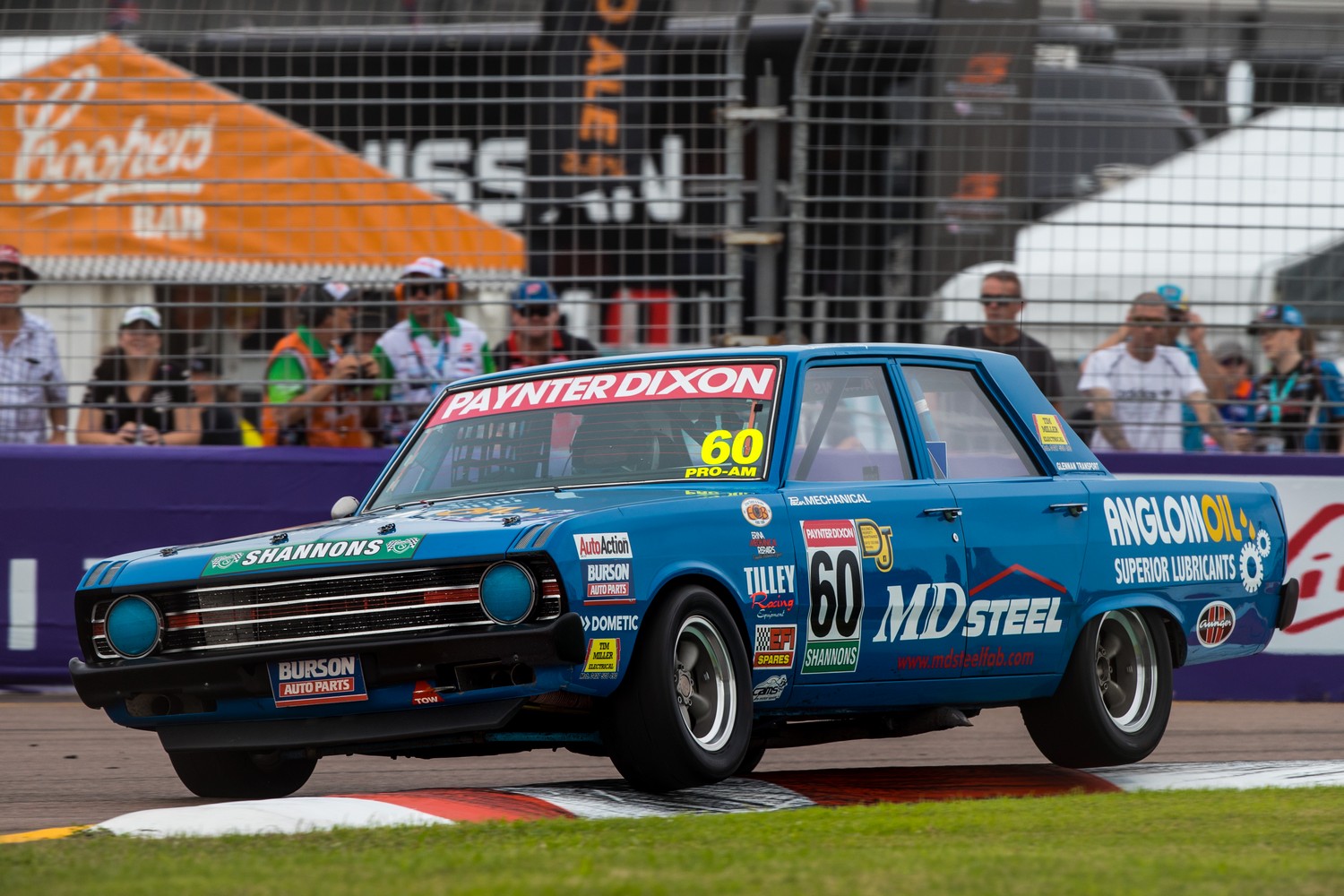 THERE will be a different sound booming from Cameron Tilley’s Touring Car Masters Valiant Pacer when racing resumes at Sandown next weekend.

Having punched well above his weight with six-cylinder power for several seasons, Cameron Tilley will have V8 power beneath his right foot at the Victorian circuit.

Though his all-out driving style and ability to mix it with cars with significantly more horsepower has attracted a legion of fans, Tilley believes the time is right to at least see if two extra cylinders can elevate his iconic Pacer from cult hero to race winner.

Tilley sits fifth in the outright standings and leads the ProAm class after six rounds, but after more than twelve months of deliberation has officially swapped Hemi Six for Mopar Eight.

“The biggest reason for making the change is that one day I’m going to pack everything up and retire and before I do that I wanted to know what this car could do with a V8,” Tilley said.

“It would have been terrible to not know ‘what could have been’ so we’ve made the call and see if it’s going to work.”

The replacement engine retains much of the Pacer’s Chrysler DNA, with the 358ci engine a factory Mopar race engine sourced from the USA. An enormous amount of work has gone into ensuring that not only can the V8 fit the Pacer engine bay – but if needed the original six cylinder engine can drop straight back in.

“It may turn out to be the right thing, and if that is the case everything I have done is 100 per cent reversible to just put the six back in,” Tilley explained.

“It has been a massive job because you just can’t get any Mopar bits any more. We’ve made the extractors, the exhaust, altered the K-Frame to accept the sump and made engine mounts so both engines will drop in. Then there’s the radiators, gearbox, clutch, bell housing and more – it’s a massive effort.”

Regulations will require the Touring Car Masters Valiant Pacer to run heavier, but Tilley says the additional grunt should outweigh the additional baggage.

“The car is about 140kg overweight as it is, so we have been running it at about 1340kg even though the minimum weight with the six was 1200kg. With the new engine we will run at 1,500kg but the extra grunt will be welcome, especially at Sandown.”

Tilley has measured expectations about how the Anglomoil / Glennan Transport car will fare.

“Whether it knocks about the handling or the power steering we don’t know!,” he admitted.

“But it has to be faster on tracks like Sandown and Bathurst. I’m not saying everyone else ‘better watch out’ because we don’t know how it will respond or change the handling of the car. But I’m looking forward to rolling out of pit lane with it.. another 150hp is pretty exciting.”

The Pacer team plans to run the car for the first time at a club-level event in Sydney this weekend before making the trip to Sandown next week.

Round six of the 2018 Paynter Dixon Touring Car Masters series will be held alongside the Rabble.club Sandown 500 on September 14-16!